Every year in Canada, approximately 4000 people die by suicide. It is the leading cause of death among Canadian men 25-29 and 40-44, and among Canadian women 30-34. We rank third among industrialized nations in our rate of suicide by people 15-17, with suicide rates for Aboriginal youth five to seven times higher than those for non-Aboriginal youth. The suicide rate among Canada’s soldiers has more than doubled since 2006, and is triple that of the general population.

Suicide is a major public health issue in our country.

It is also a private tragedy leaving a wake of heartbreak among those left behind. According to Frank R. Campbell, past president of the American Association of Suicidology, about 28 people are directly impacted by a death by suicide, which means that every day, more than 300 Canadian spouses, children, parents, friends, grandparents, aunts, uncles, cousins, teachers, classmates, co-workers, and neighbours are left reeling from this sudden and shocking loss. And what about the thousands still carrying the wound of a suicide that occurred last month, last year, or several years ago?

We live in a society that hides suicide away in the shadows. In North American culture, we not only marginalize suicide, we marginalize death, grief, and other emotions and circumstances that don’t fit the dream of eternal happiness. Which drives countless people to the ranks of the walking wounded, haunted by a grief they can barely acknowledge, never mind address.

Donaleen Saul, who lost her younger brother to suicide in 2004, says there is a path to healing from this terrible loss. A writers’ coach and journal writing instructor, Donaleen describes this healing in her book, Did You Know I Would Miss You? The Transformational Journey of the Suicide Survivor. Equal parts memoir and self-help journal guidebook, Did You Know I Would Miss You? guides the bereaved through the complexities of grief by suicide, and carries them home to transformation and renewal.

Catherine Sosnowsky, head of the BC Chapter of The Compassionate Friends, an international organization for parents and siblings bereaved by the death of a child, has said, “Donaleen Saul’s searingly honest account of her search for meaning after her brother’s suicide leads the reader through the depths of despair to the heights of wonder…If you have lost someone to suicide, or by some other means, you will want to return to this guide again and again.” 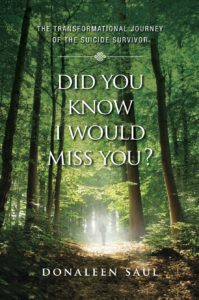